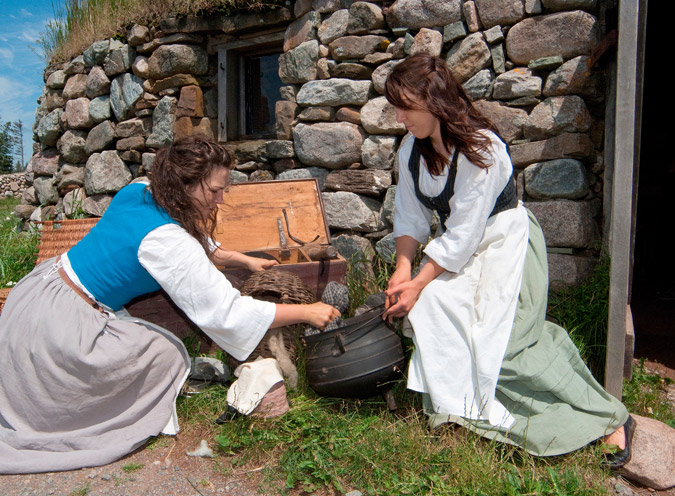 The Gaels of Nova Scotia hold tightly to an ancient legacy through their language, cultural
expression, music and dance, and faith. The roots of Gaelic Nova Scotia are found in the
Highlands and Islands of Scotland where significant Social and economic changes in the 18th
century disrupted the traditional lifestyle of the people. These changes prompted our Gaelic
ancestors to look towards Nova Scotia.

Between the mid 1700’s and the late 1800’s tens of thousands of Gaelic speaking Scots came
to Nova Scotia to begin a new life in a land rich with resources, but full of its own challenges.
They landed on the shores of Nova Scotia to find a home where they could live their lives
freely, but where they faced new challenges such as adapting to our significantly different
climate. Our Gaelic ancestors adapted to these conditions and began clearing their land to
establish new lives and communities.

Settlement patterns show that new communities created by the Gaelic settlers were often
based on the same community groups they were familiar with in their homeland. This pattern
of chain immigration saw communities and villages spring up all over Nova Scotia which
were mostly based on family connections or religious beliefs. Gaels were, and are, a tightly-
knit group of people who value community spirit and who were always willing to lend a hand
when needed. Community members often worked hand in hand with each other to build
their church, school and even held community barn-raisings to help new members of the
community.

The language, culture and rural lifestyle of our Gaelic ancestors flourished in Nova Scotia
throughout the 1800’s into the early 1900’s when changes such as the attraction of cities,
industrial jobs, railroads and an English-only school system began to make it difficult to
continue on as they had. Many people held tightly to their roots during these changes, with
faith and determination. These proud tradition-bearers who have passed on their language,
culture, music, song and dance through a thriving tradition of oral history.

To this day the legacy of our Gaelic Ancestors remains on the map of our fair province.
Communities like Iona, New Glasgow, Inverness are all namesakes of towns and villages our
ancestors left in Scotland. Gaelic classes, educational programs, traditional music and song,
and other events are held throughout the area, and help us to continue to embrace our Gaelic
history.